It took less than two billion years for our Milky Way Galaxy to emerge from the chaos of the Hot Big Bang some 13.8 billion years ago. Another 7 billion years would elapse before our Sun and Solar System took form. During this time, the thermonuclear processing of matter in the cores of stars and during the violent deaths of massive stars collectively forged the heavy elements that characterize our rocky home planet.

On Earth’s moist surface, microbial life took hold less than a billion years after the Sun turned on. Yet another three billion years would have to pass, before multi-cellular life forms began to leave fossil records in the accumulating sediments of sand, mud, and limestone. The remaining 500 million years up to the present day have witnessed the successive flourishing of primitive sea animals, land animals, flowering plants, dinosaurs, mammals, and – in the last two million years – humans. 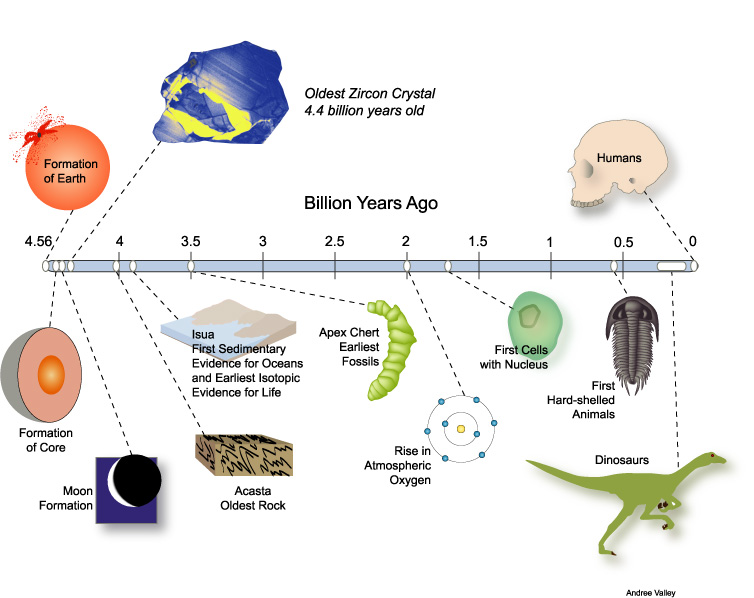 Timeline of Earth’s history, including the origin of microbial life 3.8 billion years ago and the evolution of multi-cellular life forms to the present day. Courtesy of Andree Valley (see http://www.geology.wisc.edu/zircon/Earliest%20Piece/Earliest.html ).

Homo sapiens began creating their distinctive and enduring stone tools, middens, and burials about 100,000 years ago. Only in the last century (1/1000 the history of modern humans and 1/ 50-million the history of Earth) have we begun to telecommunicate beyond Earth. Using radio and television transmitters, we have become inadvertent players on the galactic stage. Already, our broadcasts have faintly traveled past thousands of stars and their associated planetary systems.

We have also begun the search for distinctive electromagnetic signals from technologically communicative life forms beyond Earth. What those species may be and what sort of signals that they may be sending out remain highly challenging questions. Once the exclusive province of science fiction authors, the topic of Interstellar Communications has come into its own as a scientific and technological field worthy of deliberate investigation.

One of the key missions of The Galactic Inquirer is to bridge the gap between the rigorous researcher and the curious public. Towards these ends, the editors of The Galactic Inquirer welcome publicly-accessible communications that help to illuminate the topics of Interstellar Communications. We seek non-technical articles, commentaries, book reviews, profiles, and photo-essays that are well-crafted and engaging.

You can contact us using the Contact form available in the main menu. All submissions should be e-mailed to us here . They should include the names and e-mail addresses of all authors along with a picture of the author(s). The author(s) should state their status as a student or professional as part of a 1-3 sentence biography.

Previous articleGalactic and Extragalactic Astronomy: an Introduction
Next articleCosmochemistry and Astrobiology

How to Talk to Aliens

If we ever make contact with an alien civilization, how will we understand what they’re saying? That’s the question that preoccupies John Elliott of...
Read more

Guest Presenter and AAVSO Director Stella Kafka reviews her tenure as Director, and discusses the role of the AAVSO in current stellar research.
Read more