According to recent popular science articles, there has been something of a revival of the traditional idea that our Milky Way is a 4-armed spiral galaxy, as opposed to having two spiral arms, as seen in the currently most popular rendition of our home Galaxy, shown here:

This artistic rendering was motivated by findings based on the observations of theNASA Spitzer Space Telescope. Indeed, this image was made expressly for the purpose of communicating some of the main findings from Spitzer with regards to Galactic structure, and in particular the message that our Galaxy is dominated by a 2-arm rather than a 4-arm structure.

Just how different the image above was from previous renditions of the Milky Way can be seen in the comparison below:

Interestingly these two images were made by the same artist, Robert Hurt, the one on the left from 2008 (post-Spitzer), and the one on the right from 2005 (pre-Spitzer). In many ways the new picture of the Milky Way on the left is a significant improvement of previous images of our Galaxy, especially with regards to the structure of the inner parts of the Milky Way and the detailed structure near the Sun. But the most striking difference between the two images is the large-scale spiral structure.

How did the Spitzer observations cause such a dramatic change in our view of our home Galaxy? As an orbiting Earth satellite the Spitzer Telescope has the same view of the sky as we do here on Earth, with the advantage of less atmosphere, of course. That is, the Milky Way appears as a band of stars across the sky. However, observing the Milky Way at near-infrared (NIR) wavelengths, Spitzer gave a less obscured view than at visual wavelengths, clearly revealing our Galaxy as a disk galaxy seen edge on:

Image of the Milky Way based on 2MASS data. Image credits:John Carpenter and Robert Hurt/2MASS Project

But from this perspective the Milky Way’s spiral structure is not clearly obvious. To deduce the geometry of the spiral arms one must look carefully at the emission profile (or star counts) in the NIR along the Milky Way’s disk, referred to as the “galactic plane”. From the Spitzer star counts the resulting plot is shown here: 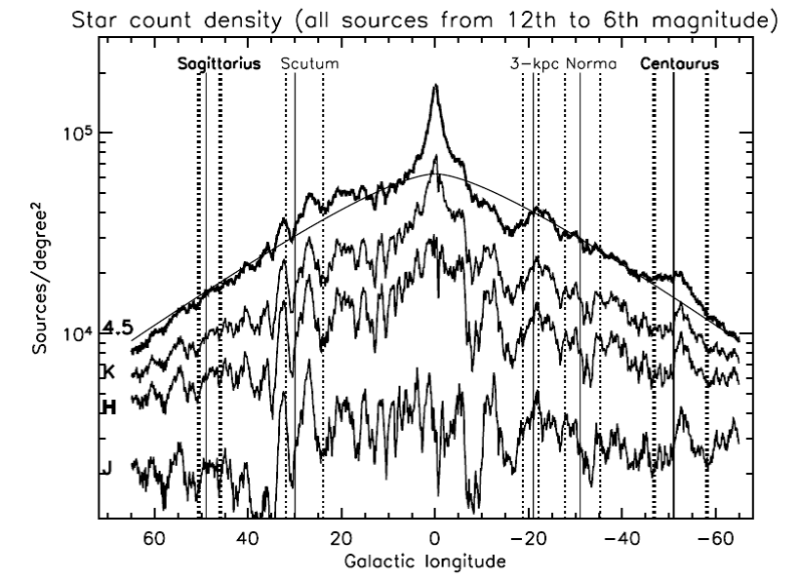 In the above plot (from Churchwell et al, 2009 PASP 121,213) Spitzer star counts at four different NIR wavelengths are shown along the galactic plane. The number of stars increases as one goes to ever longer wavelengths because of the decreasing amount of interstellar extinction. In the J and H passbands the profile is erratic due to extinction, but clear features begin to show themselves in the K passband, and become even clearer at even longer wavelengths. Toward the center of the Galaxy (at longitude 0) a prominent peak is seen, but of interest to us here are the smaller peaks that are labelled in the above figure. In these directions more stars are seen than one would expect from a smooth featureless disk of stars because these are in the directions of the tangents to the spiral arms.

For example, in the figure above, the two orange arrows show the two tangents that correspond to the features labelled as Scutum and Centaurus in the previous plot, allowing us to deduce the geometry of one of the more prominent spiral arms. However the Spitzer plot also shows the lack of an expected feature in the direction of one of the tangents of the Sagittarius-Carina arm, predicted from the traditional 4-arm spiral model. Thus the NIR data clearly indicate that the stellar distribution of the disk of the Milky Way is dominated by a 2-arm spiral pattern.

That the Milky Way is dominated by a 2-arm spiral structure in the NIR was not a new idea. Other space missions before Spitzer had also observed the light coming from our Galaxy in the NIR, and indeed the Spitzer data confirmed earlier findings. The figure here below shows data from the COBE satellite (fromDrimmel 2000 A&A Letters 358, L13), showing the NIR emission profile in the K passband (upper profile), together with the emission profile in the far-infrared from the thermal emission of interstellar dust (lower profile).

Again, the relative prominence of the tangents of the Scutum-Centaurus arm in the NIR (labelled S1 and S2), in contrast to the lack of similar features in the directions of the Sagittarius-Carina arm tangents (C1 and C2), clearly indicate that the stellar distribution of the Milky Way has a 2-arm spiral structure.

Recent confirmation of a 4-arm spiral

In contrast to the above conclusions drawn from the NIR data from two important space telescopes, there has recently been some publicity on the web ofnew findings confirming the traditional 4-arm picture of the Galaxy. These reports are based on two recent studies, the first (J. S. Urquhart et al 2013) of young embedded massive stars, and the second (D. Camargo, C. Bonatto and E. Bica 2015) of young embedded clusters. Here the term “embedded” means that these stars and clusters are still hidden in the dense and dusty molecular cloud complexes that gave birth to them, rendering them visible only at NIR wavelengths. In the first study the authors compile data of over 1500 young massive stars and find their overall distribution, shown in the figure below:

As can be seen, the positions of these objects trace out the Sagittarius-Carina arm, just inward of the Sun’s position in the disk of the Milky Way, as well as an outer arm, both as expected with the 4-arm spiral model.

In the second more recent study embedded young clusters and their positions were used to trace the spiral arms of the Milky Way, giving again a distribution of young clusters that support the 4-arm model: 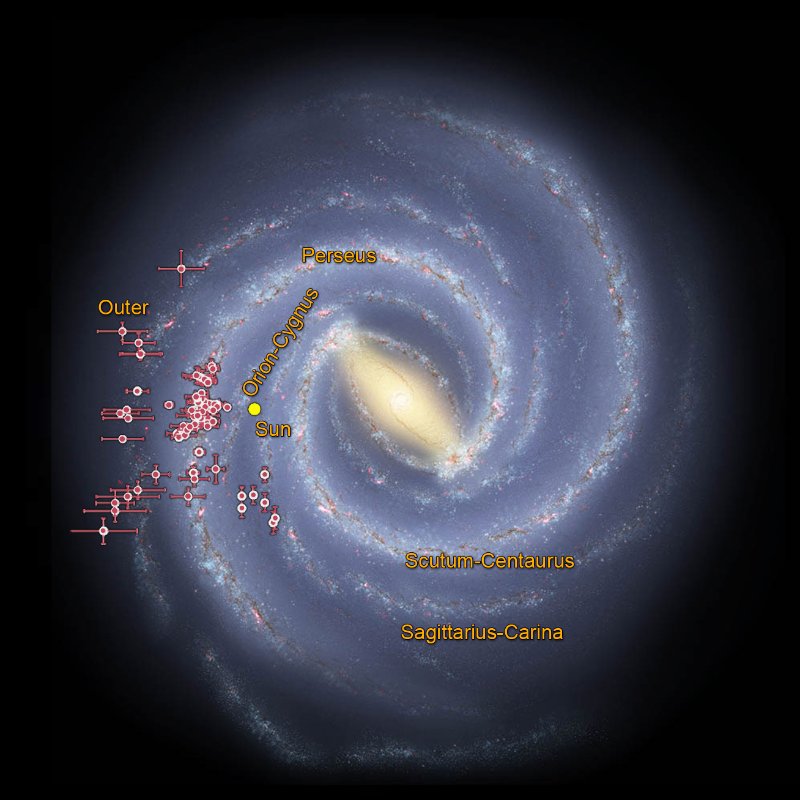 Distribution of young embedded clusters from Carmaggo et al. 2015, overplotted on the Hurt artistic rendering of the Milky Way.

So are these more recent findings, themselves based on NIR data, in conflict with the conclusions drawn from the earlier analysis of the COBE and Spitzer data favoring a 2-arm spiral model?

Astronomers have been wrestling with the question of the spiral structure of our Galaxy ever since we realized that the Milky Way was but one of many spiral galaxies in the Universe. Ironically, the question of how our Galaxy would look to an external observer is made difficult by our proximity to the subject, or rather, our location within it. We literally cannot see the forest for the trees, as our view of the Milky Way’s large scale structure is obstructed by nearby clouds of dust and gas.

At least, this is the case at optical wavelengths.

Perhaps the first clear picture of the Milky Way’s spiral structure came from studies of HII regions. These are regions of hydrogen gas that have been ionized by the light of bright young massive stars, and their distribution clearly show a four arm spiral structure:

It is hardly surprising that the recent studies mapping embedded clusters and massive stars support the above picture, as all of these studies are tracing the same thing: young massive stars. Such stars have very brief lifetimes with respect to the time needed for stars to rotate around the Galaxy, so they are efficient tracers of where star-formation is occurring in the Milky Way. Using massive stars and associated HII regions to trace spiral structure is well motivated, because at optical wavelengths the spiral structure that we see in a face-on image of a disk galaxy comes mostly from just such objects.

So why are the results based on the Spitzer and COBE data apparently in conflict? Simply because in the NIR most of the light comes from cooler, older stars making up the bulk of the stellar mass in the Galaxy, rather than from the relatively few, bright short-lived massive stars that make up a tiny fraction of the total mass.

An analogy that I like to use is that of ocean waves as seen on a moon-lit night: What one can see from a dark beach is only the foam from the breaking waves, but this foam is just a miniscule fraction of mass (and energy!) in the wave. Similarly, the massive stars and HII regions may be the most luminous part of spiral arms at optical wavelengths, but they are only the transient bubbles making up the foam that is continuously regenerated as the gas responds to the spiral waves in the disk, forming new massive stars.

How would our Milky Way appear to a distant observer from another galaxy? Probably something between the two Milky Way renditions shown above in the second figure of this article. Four arms would be apparent, but the underlying broad arms of the two-armed component would be redder and less obvious than in the newer artistic rendition on the left. However, if our distant observer looked in the NIR, our Milky would very likely show itself as a beautiful, grand-design two-armed spiral galaxy. 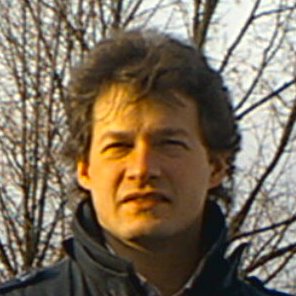 Ronald Drimmel is a research astronomer studying the Milky Way at INAF-OATo, and can be found on Twitter @rdrimmel.