Musical Explorations of the Messier Catalogue of Star Clusters and Nebulae

I have always been a musician with a passion for astronomy, and this sense of connection to stars, nebulae, and distant galaxies has often sparked my musical compositions. One of my most important works immediately following my 1979 graduation from Juilliard was a piece for brass quintet, Starry Messenger, that was inspired by Galileo’s Nuncius Siderus. Years later, my Ph.D. dissertation consisted, in part, of an orchestral symphony entitled Terrestrial, Celestial. I went on to compose Alpha Centuri (for harpsichord and chamber ensemble) and a series of choral works on astronomical themes: StarSongs, Guide to the Winter Sky, Celestial Winter, Celestial Spring, and Regarding Eclipses.

In the late 1990s, I became captivated by the Hubble Space Telescope’s images of Messier Objects. Charles Messier (1730-1817) was a French astronomer who compiled a list, or “catalogue,” of approximately 110 diffuse objects in the night sky, objects which in Messier’s day were often confused for comets but are now recognized to be star clusters, nebulae, immense star “clouds,” and remote galaxies. His catalogue is still in common use today.

The Hubble Space Telescope’s exquisite renderings of Messier Objects revealed vistas of extraordinary color and beauty along with great variations in energy patterning – spiraling, floating, exploding, diffusing, and chaotic swarming – that strongly suggested musical variations in rhythm, texture, formal design, and melodic elements. My first reaction was, “I have to do something with these!” Resolving at once to compose an important piano work based on Messier Objects, I envisioned a group, or suite, of three-minute Messier pieces, each based on a different object. When performed in series, the individual pieces would form Musical Explorations of the Messier Catalogue of Star Clusters and Nebulae; a work of major length (about 45 minutes total duration) and virtuosity which I or other professional pianists would find a challenge and a pleasure to perform (see www.brucelazaruscomposer.com ).

Master jugglers such as Michael Moschen steer fragile glass balls through space in ever-changing circular patterns. The movement pattern of M104 , the radiant ‘Sombrero” Galaxy , is a combination of the circularity of a spiral galaxy with the swarming of a perpendicularly-inclined elliptical galaxy. My Sombrero piece expresses this celestial juggling act musically: notes and phrases, stars and gases moving constantly in complex, circular patterns. The four-minute work opens with a short but fairly complex and rhythmically unbalanced musical phrase which is repeated – rotated – throughout the work while being subjected to continuous variation in harmony and texture. For three minutes the phrase is allowed to grow ever-more dense; at the moment of peak density a second contrasting, extremely slow-moving rotational pattern is added in the bass before the music dissolves into nothingness in its final seconds. I chose 5/4 time, or five beats per measure (with each quarter note receiving one beat) to lend a rhythmic instability not as readily achievable with more common, symmetrical meters such as 3/4 or 4/4. This unusual, asymmetrical time signature yields an unbalanced effect as though at any moment Mr. Moschen’s steady hands could falter and the glass balls will shatter on the floor. Of course, they never do.

My live performances and the CD of the Messier pieces begin with the “Sombrero” Galaxy piece in homage to J.S. Bach whose mighty cycle, The Well-Tempered Clavier, also begins with a piece based on a single repeated pattern, the familiar Prelude in C Major.

Newly created stars – protostars – emit streams of hot, charged particles which intensify into immensely powerful stellar winds that blow furiously at hundreds or thousands of kilometers per second throughout M42, the Orion Nebula . Meanwhile photons of ultraviolet light from the hottest stars irradiate and excavate any exposed surfaces in the nebula. The resulting shockwaves de-stabilize regions of dust and gas that ultimately coalesce and spawn yet more young stars. I grasped at once that to portray M42 musically I must represent the stellar wind; its supersonic speed, its power to destroy and create. After much experimentation, I arrived at a basic “wind” phrase: a rapidly moving pattern of three chromatic (adjacent) notes arranged in groups of twos alternating with threes. To get an idea of how this phrase sounds, look over the example below, and recite out loud the row of numbers as fast as you can, with emphasis on the numbers in boldface:

This repeated, asymmetrical phrase allows a musical wind to blow furiously throughout the two-and-a-half minute piece, leading the listener to musical regions where the wind seems to collide with conflicting phrases and even shatter into splintered fragments before reasserting its devastating strength.

The Orion Nebula piece is a formidable technical challenge for any pianist’s hands and was two years in the making before it reached its final form. In contrast, M57, the Ring Nebula , is easy to play and took only a few hours to compose. The “Ring” – actually a translucent globe of expanding gas with a tiny, brilliant stellar remnant at the center – is the result of a giant star’s casting off its outer shell and dwindling to a white dwarf. Influenced by French composer Olivier Messiaen (1908-1992) in such works as Quartet for the End of Time and Illuminations of the Beyond, as well as Chopin’s well-known Prelude in E minor, I combined a gentle, rhythmically constant pulsation played by the pianist’s left hand with a slowly developing, dream-like melody for the right hand. But rather than growing more intense as expected, the melody becomes ever more fragmented and tenuous until the flow of continuity is dissolved. This musical dynamic is intended to convey that the expanding gas shell, having traveled a considerable distance, has finally dispersed into space.

Composing a musical portrayal of M18, Open Cluster with Red and Blue Stars presented the challenge of finding form for formlessness, as M18’s stars and gases appear randomly scattered. The open cluster has no tangible shape or consistent flow of energy. It would have been quite easy to concoct a near-improvisational scattering of notes all over the piano keyboard, but I devised a means of organization in which a hidden structure would produce an impression of formlessness but contradictorily imply a tangible beginning, middle, and end. Intuitively reaching into my distant past, I plucked seven very short phrases from my 1976 piano composition, Message of the Stars, and organized them one after the other into a single long sequence. Much to my delight, the sequence had a disjunctive but still musical continuity — exactly the effect I needed. With experimentation, I found that by changing octaves, key centers, and rhythms the entire piece could consist solely of four varied repetitions of the long sequence. When I play M18 at informal gatherings I usually offer to play it twice: the first time to let my listeners be swept along by its apparent shapelessness, the second time to allow an opportunity to detect the hidden structure.

Although the performance note for M31 , the magnificent Andromeda Galaxy , reads, “more an impression of grandeur and circularity than speed,” I adopted a strange 3/1 time signature to accommodate intricately patterned music which races by at 12 eighth notes per second in expressing the circular, almost ballet-like motion of Andromeda’s spiral arms.

I recorded the entirety of Musical Explorations of the Messier Catalogue of Star Clusters and Nebulae in a five-hour session on Columbus Day, 2011, on the beautiful Bechstein piano at the Church of Saint Luke in the Fields, New York, with producer and engineer Eric Somers, Tonmeister, at the controls. The result of that busy afternoon was a state-of-the-art album released for CD or download by Composer Concordance Records in April, 2013, with global distribution by Naxos of America.

I’ve performed the Messiers live-in-concert several times: at the 2010 Cambridge Science Festival, the 2011 World Science Festival and the 2012 American Dance Guild Performance Festival with choreography by Mary Seidman and Dancers, and the 2013 South Florida Science Festival in honor of Carl Sagan Day. I look forward to the pleasure of performing at future concerts, events, and smaller gatherings — wherever I can share with others my sense of connection with the cosmos. 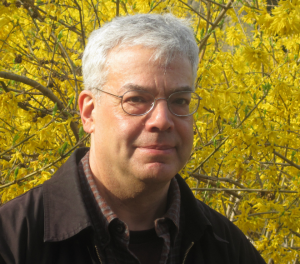 Composer and pianist Bruce Lazarus earned his B.M. and M.M. in music composition at Juilliard, and later his Ph.D in music theory and composition at Rutgers University. Lazarus characterizes his music as “concise, architectural, contemporary, and in turn meditative, humorous, moody, and exuberant.” He frequently turns to astronomical imagery for his more descriptive works. Mr. Lazarus resides in New York City.

Bruce Lazarus’ album, Musical Explorations of the Messier Catalogue of Star Clusters and Nebulae is a series of fourteen piano pieces based on the work of astronomer Charles Messier (1730-1817). Composed between 2004 and 2010, the album is now available on CD (CCR00014/Naxos) or through download at iTunes, Amazon, Barnes & Noble, and other online venues. The album was produced by Eric Somers, with cover artwork (Spiral Nebula, 1997, detail) by Victor Raphael. Bruce Lazarus’ works also include music for chorus, solo voice, theater, and chamber ensemble.

Bruce Lazarus welcomes email at brucelazarus2k@yahoo.com for comments, inquiries about Messier in live performance, or to purchase scores.